Anglo Coal's Goedehoop Colliery ( a member of the Anglo American plc group ) situated in Mpumalanga Province South Africa produces some 5.3 million tons of coal per annum for export. A recent decision to develop an underground section known as Block 8 necessitated the installation of an 8 Kilometre overland conveyor system to carry coal to the processing plant. 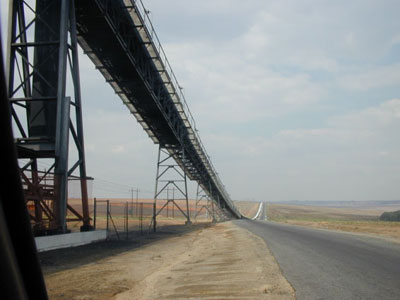 The installation comprises 3 different conveyors, the longest of which has a centre distance of 4.2 Kilometres in a single flight. Fenner Solid Woven Conveyor Belt was specified after careful consideration of all alternatives. This is the longest single flight Solid Woven Belt installed in South Africa and is proving a viable and highly cost effective alternative to steel cable belting.

The belt was designed on reduced safety factors that added to the already significant savings. The normal Safety factor of 10:1 was reduced to 8:1 through close cooperation between Anglo and Fenner engineers. Some of the features of this installation which were jointly agreed upon were the use of Variable Speed Drives and a "soft start" system to regulate starting tensions. Through this cooperation it was possible to reduce the belt tensile whilst maintaining the ability to convey the designed tonnage within acceptable elongation parameters. An appropriate take-up system was designed.

In addition to cost saving, the use of Solid Woven is seen as a preferred product when compared to steel cable belting, as this type of belting is not prone to slitting and cord damage that is so much a feature of steel cable belting. Consequently it was not necessary to fit expensive electronic or other types of rip detection equipment.

An advantage to the use of Solid Woven belting is the ability to affect rapid splicing in breakdown conditions whereas steel cable belts cannot be clipped as a temporary measure.

Fenner's SUPER WEAR RESISTANT covers were specified for their superior abrasion resisting properties. The cover compound is an exclusive Fenner innovation and is being widely specified in place of both plied and steel cable conveyors. This has come about as result of these covers having been previously specified at other locations within the mine with excellent results.

Fenner's own splicing crew did the splicing and this enabled the provision of guarantees on both belt and splices.

Ongoing cooperation entails the regular survey of the belts by Fenner staff and input regarding maintenance items.

Technological advances in solid woven conveyor belting is resulting in this product becoming accepted in a wide spectrum of applications as a cost effective replacement for both steel cable and plied belting.

Fenner believe that the project is a good example of how suppliers and users can combine their technologies to produce an innovative money saving solution through effective partnership.